I snuck out of our bedroom after I had put CC down for her afternoon nap.

I had big plans. I made certain provisions in the morning: the girls and I had finished school early, Abby had a couple of more things to do, but it was mostly independent work, they were playing in their costumes outside, as far as I knew, and I was getting ready to do a little research…until Phoebe came in flashing her brand new fake nails that Daddy bought last night. I sent Greg to do the Halloween shopping for the girls this year. He is so good about volunteering to do things for me and has no problem running “girly” errands for me…picking up all the unmentionables for his lovely and appreciative wife. He always comes back with the best stories.

But this errand was a little different. When he came back with the girls after Halloween shopping, I noticed he had bought Abby a little special something for her costume. More on that in a minute…upon hearing Phoebe’s news, I gave Greg that special look…he knows the one…and then I did my deliberate blink, the one where I contemplate not opening my eyes just to see if someone will say something to wake me from this daymare…and then inhale a big ole breath of air.

“Are you mad Mommy? I told Abby we should wait for you…I don’t want you to be mad!” Phoebe’s little voice treading lightly and checking in. I wouldn’t have cared if they were those lee press on nails. Every 6 months the girls forget what an incredible pain they are and with tears in their eyes, beg me to buy them. But Greg didn’t purchase the press ons, with the double-sided tape.

He bought an acrylic nail building kit. Yes you read that correctly, an acrylic nail building kit to complete our 9-year olds Halloween costume. I will write that again…An acrylic nail building kit. “Oh wow, Daddy…look what you did…wow, this is complicated. Are you going to put these on?” I ask desperately trying to hide my sarcasm. “Actually, I am really good with detail stuff like that…sure I’ll do it” he says in his most confident it can’t be that hard voice. What made the kit so unique was that it came with lady of the night length nails as well as lady of the night for the next week length nails, nail glue, a shaping tool, acrylic paste and finally acrylic powder. The only thing I know about acrylic nails is that my step-mother used to take me and my step-sister to a downtown Salon in Boone to get them. They built the nails right on top of my own.

AND IT TOOK FOREVER! 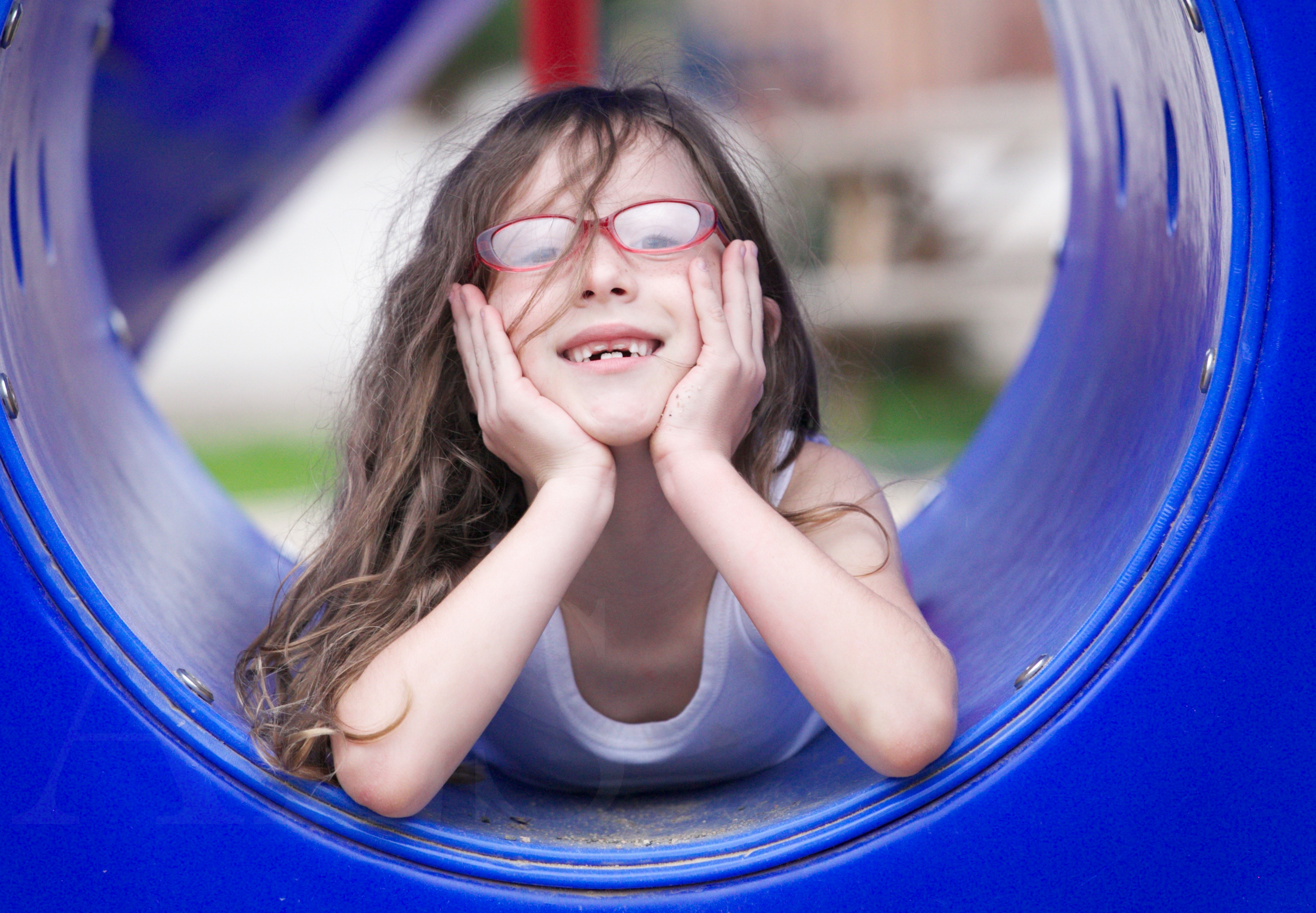 Then Abby runs in to tell me the mixture on the nails is some sort of gel. I confess I don’t know that much about gel nail polish either…I have heard it lasts a long time and it is difficult to take off. “Great” I thought. I admit I had preconceived notions about what I was about to look at, considering all the nail catastrophes they’ve gotten themselves into in the past. But as Phoebe presented them to me, I didn’t see anything that looked scary.

I was not happy about Abby going ahead and using the liquid glue without my permission and I sure as hell wasn’t about to attempt to remove them. So, I just shrugged and said, “I wish you had asked me first Abby. They look really cool Phoebe. And Abby, thank you for not doing her nails in our kitchen.” “I want the really long nails Mommy” said Abby with her eyes all aglow. “Of course you do” I replied, “You need to finish your Grammar and then we’ll put them on.

I sat down to begin my big plans. I was all set up. My computer was on, I had a hot cup of green tea, my favorite snack of carrots and almonds, and some books for my research. I hadn’t been sitting for 5 minutes and all of a sudden Phoebe starts crying and throwing a massive fit. And don’t you know, she was frustrated because she couldn’t do all of the dress-up things she wanted to do with her baby doll because of those damn nails.

I took a deep breath.

A mother knows when her moment has come and gone.

I put my hot tea on the counter, snuck into our bathroom to retrieve my fingernail polish bag. We tried remover and it was a bust. Thank the good lord for Isopropyl alcohol. I couldn’t help but laugh (internally of course) because she wanted them so bad and here she was 5 minutes later having an absolute fit, full tears streaming down her sweet face, trying to yank them off, the most frustrated I have seen her in a long time. I asked her to come and sit with me on the couch, “Okay Mommy, I need Mr. Purple Blankie” she whimpered and pathetically forced herself to grab Mr. Purple off the table.

I love her heart so much.

It took about 45 minutes and 4 cotton discs to get all ten nails off her little fingers.

Then it’s Abby’s turn. I looked her square in the face and asked her if she really wanted to put them on after what Phoebe just went through. “Yes, I’ve had them before and I’m a little older than Phoebe and I’m more fancy, so I think I will be better at handling them.” “And you think you can keep them on until Halloween…you know that’s like 3 days away. You won’t be able to change your earrings, go swimming or do any other fun stuff.” To which she happily replied, “I’ll be ok to swim! I can handle it!” Clearly she thought some things through…she had an answer for everything. 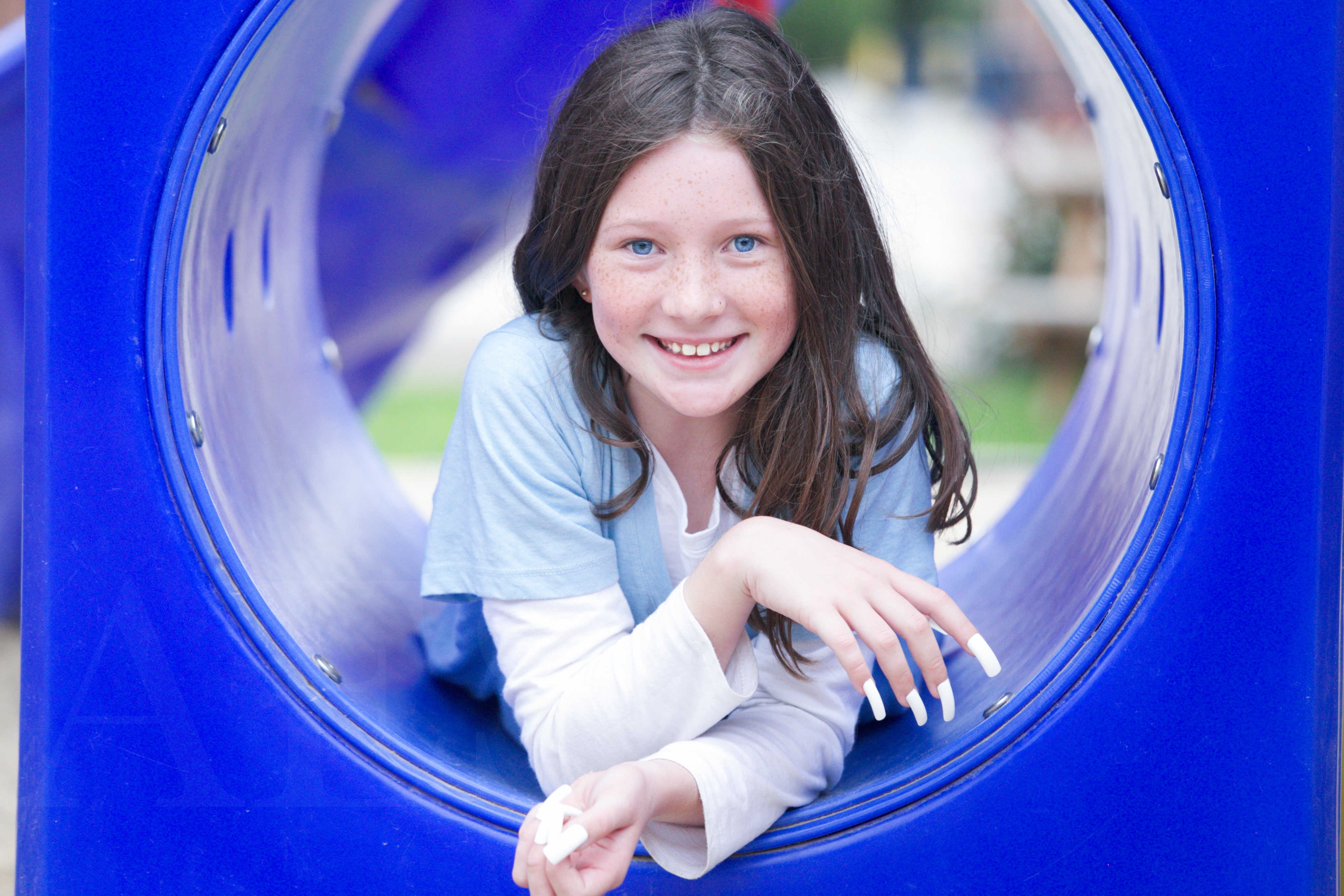 There goes another 45 minutes of filing nails down, glueing, and making my 9-year-old happy. She was so excited. 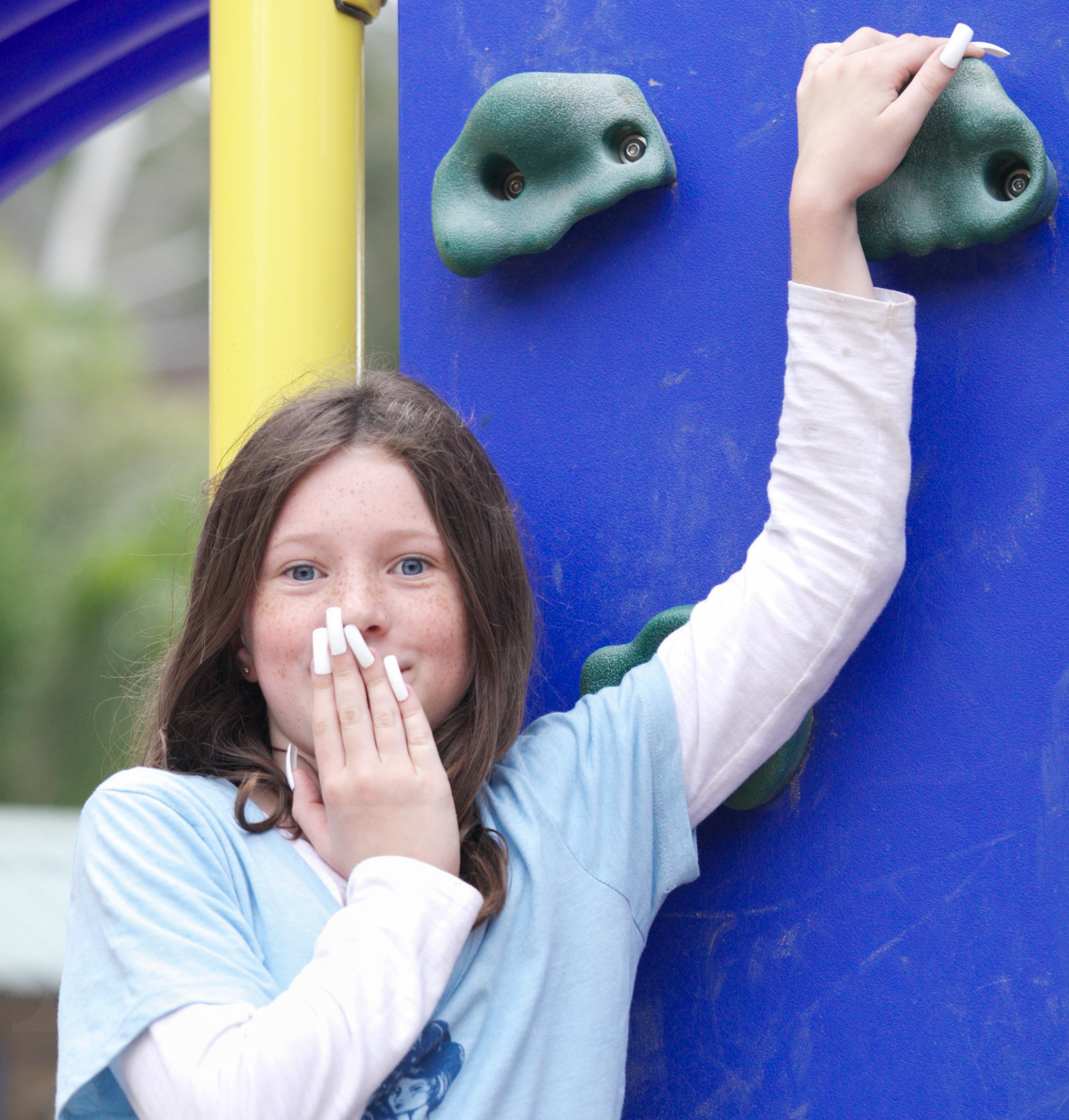 And then Cecilia came shuffling through the door..nap-time over and thus Mommy time over. “Let’s go to the park” I throw my hands in the air conceding defeat. You know what they say, “If you can’t beat them, and by this time it is very apparent winning is not in my future, join them. We played for an hour and had a grand ole time.

Abby wanted and in fact BEGGED me to take pictures of her with her awesome nails at the park. “Don’t ask me twice” I always say to their photo requests. While I was chasing Phoebe and Cecilia, out of the corner of my eye I spied Abby holding her arm outright, with her hand stretched out to the sun shifting her hand in different directions so she might get a glimpse of the shine from the polish. “Maybe she will keep them on this time” I thought to myself. She was over-the-top excited. So excited in fact, after an hour of playing she finally came to the realization, apologetically I might add, that in fact she was not a big fan of the nails. And there goes another 45 minutes removing the nails once again. 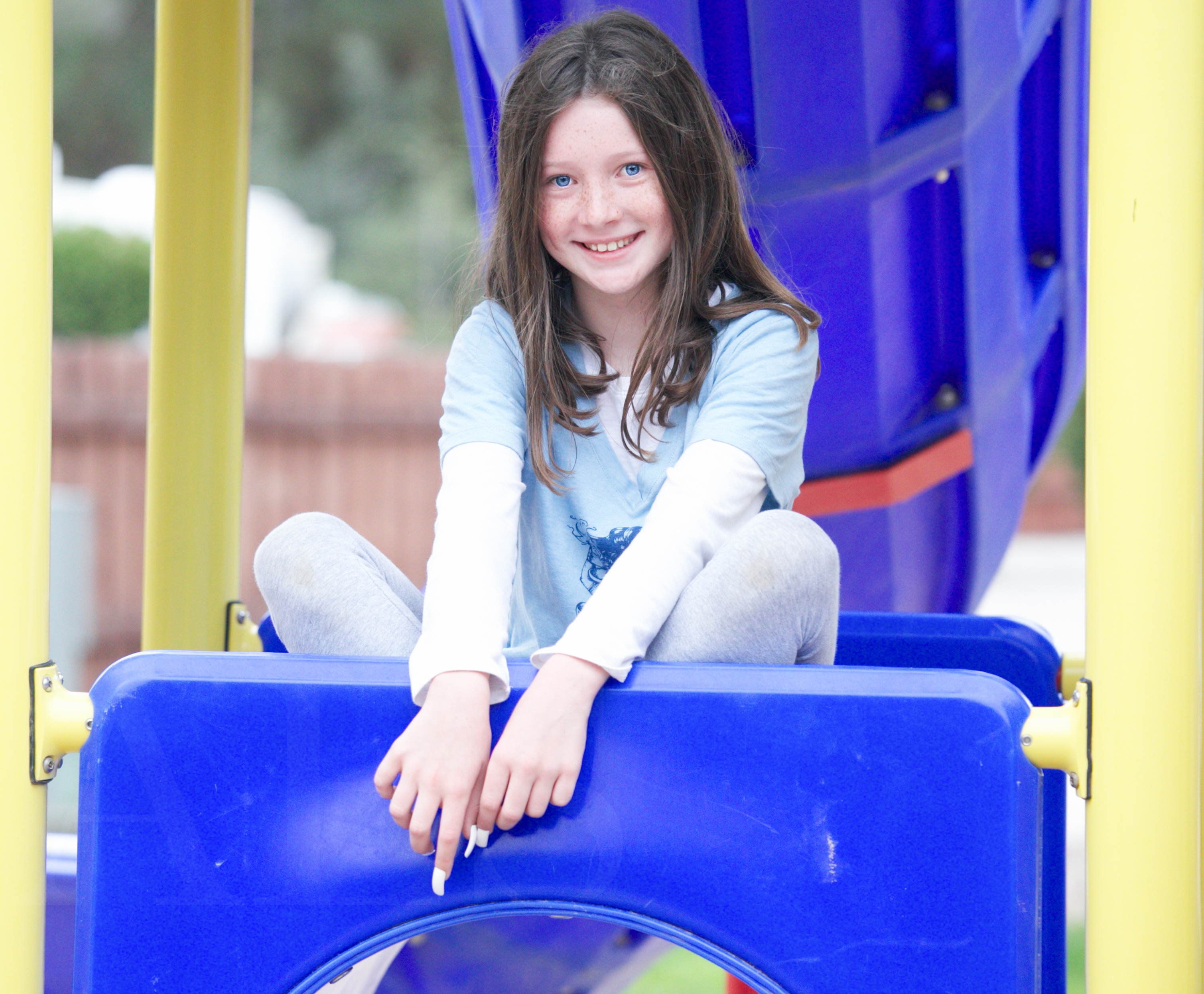 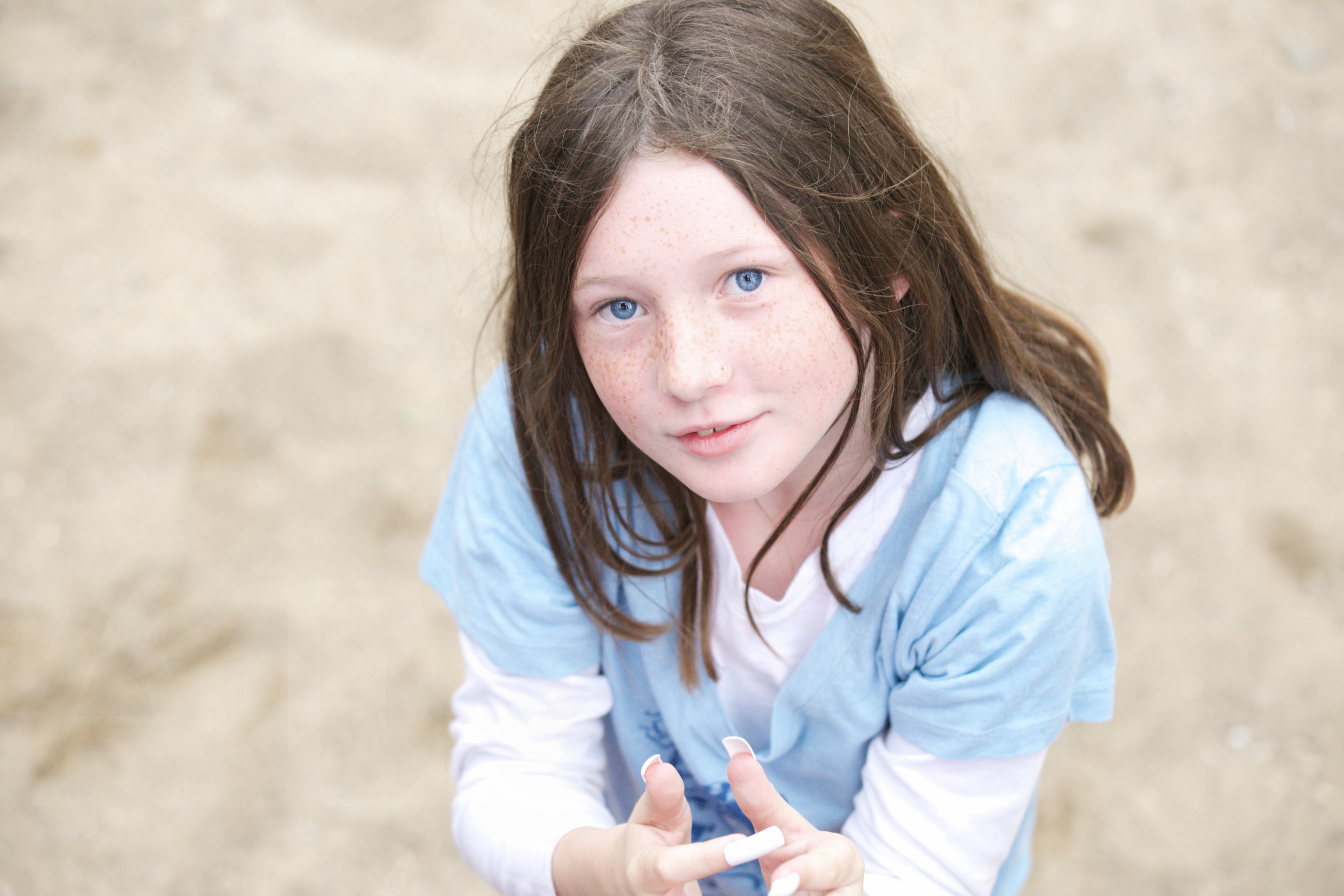 I am considering giving Gregory Kenneth an “I will never have to run another errand for her again” pass. This time, the joke is on me.

2 thoughts on “TWO HUNDRED TWO…lady of the night nails”