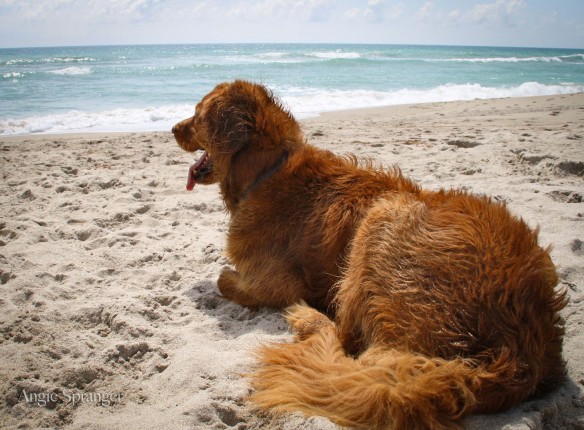 For the past 3 weeks I have been struggling to get back to our normal routine. On Wednesday I was finally able to make all the bi-annual and annual doctors appointments for everyone, including our furry side. Bear’s appointment was scheduled for Monday. I also made a hair appointment for him on Saturday.

I have to back it up, 3 weeks ago, while we were in Michigan, he was his usual ’10 year old body trapped in a 5 year old’ self, running in his make-believe-dog-derbies…practicing his near perfect figure 8 circle run. He won it every time. Last week, the kids and I were in the sitting room taking pictures when he tried to practice for the indoor derby championships; he did his usual start-up rev where his feet and legs start moving 5 seconds before his body actually goes anywhere, most likely due to our tile floors. He’s a real-life cartoon version of himself…and champion of his own indoor/outdoor derby dream run. 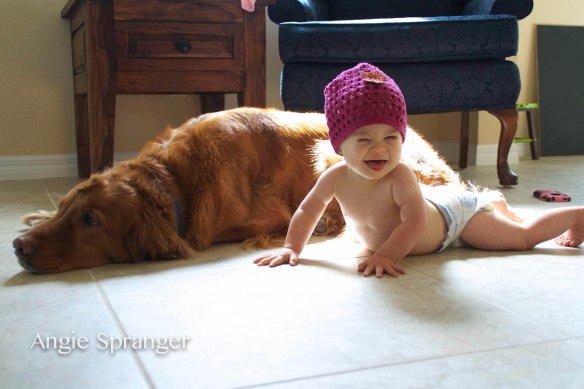 So when Greg woke me up in a panic early this morning, worried about Bear’s breathing and unusual lethargic behavior, I thought he was overreacting. “Oh you know Bear…he probably just ate something or the walk we took him on the other morning was too far and he was still recouping” I tried to reason. But I did not know Greg to ever be this emotional without reason. He spent at least 7.5 to 8 hours with him Monday – Friday every week for the past 7 years (not including the time he spent sleeping in the same room with us. Greg is a light sleeper and would wake up if Bear adjusted himself to find a better sleeping position or had a bad dream). It could have even been 8.5/9 hours, but Bear came out for the occasional interaction with the kids and I when he would like a walk, a potty break, water, food or just to do his routine checks on everyone in the house. He would then patiently sit by the bedroom where Greg was working and wait for one of us (myself, Abby or Phoebe) to notice he was ready to get back to his work of making sure Greg was never alone. 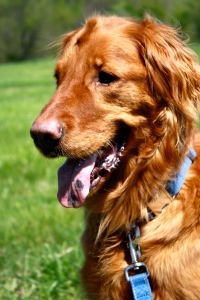 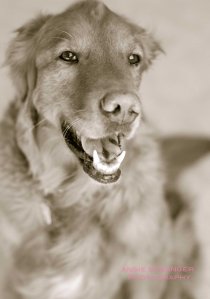 When the kids and I knelt down to try to rouse him his tail wasn’t wagging. He wasn’t moving away from Cecilia when she came eyeball to eyeball with him. It wasn’t characteristic, but I wasn’t convinced. I was a little worried, but it’s Bear. When I made the appointment on Wednesday for Bear, I had the option to choose between Friday and Monday. I felt like if I called, I could probably squeeze him in this morning. I made an appointment for late in the afternoon, but after explaining some of his symptoms the receptionist suggested I bring him in so he might be seen between appointments.

We all climbed in the car and dropped off Bear. In less than 15 minutes we were home and I was answering the Dr.’s call for permission to take a couple of x-rays. I gave her the go-ahead and asked her if she could “venture a guess” and when she said she felt “worried it may be cancer” then things became very real. I had contemplated not telling Greg, but then she said the dreaded word. I tell him everything. It seemed so wrong not to share but I knew it would hurt him. I definitely didn’t want that. 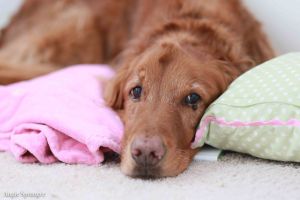 I learned a long time ago, the best way to deliver bad news is just to say it outright – no emotion, no point-of-view. Like a needleful of penicillin or an epidural just get it in there as quick as you can. Not even a full 15 minutes later the Dr. was calling us back with the news we didn’t want to hear. Tearfully, the Dr. suggested the best thing for Bear was to put him to sleep. We hadn’t even been home for a full 30 minutes and we were all packing into the car once again to say our goodbyes. Everything happened so fast. Too fast. I couldn’t get a handle on what we were doing. It didn’t seem real. I didn’t want it to be real.

He was the perfect dog for our family. He was our first and only child for 2 years before we had Abby. When Greg and I went to meet him to see if he would be a good fit for our newly formed family, he was this pudgy little frizzy ball of red hair. And he had a big butt. He came out of the garage to meet us and check us out and then went back to the garage and fell asleep on the floor. Yep…this was the dog we wanted. He seemed goofy enough to fit right in. 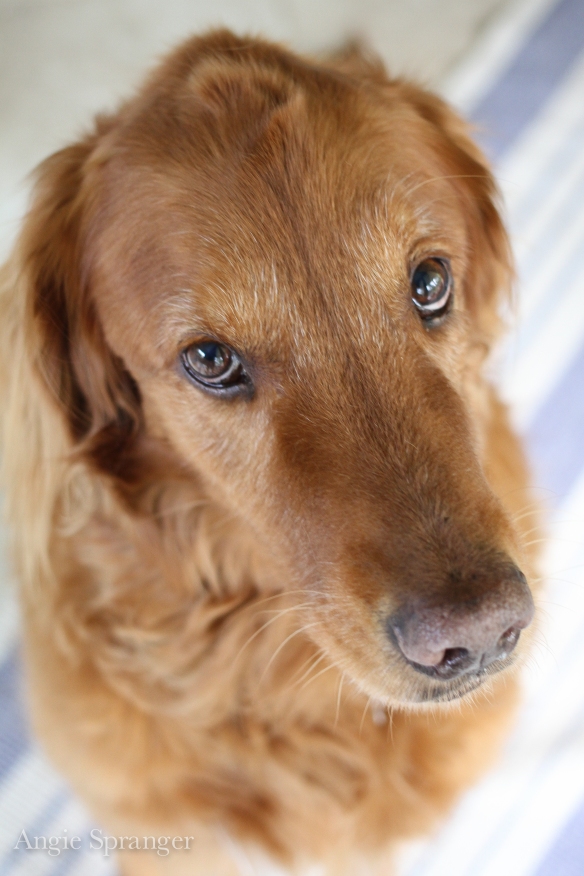 Greg came up with the name after the Alabama Football coach Bear Bryant. We spent all of our free time with this beautiful little ball of energy teaching him how to walk with us on a leash and how not to go potty in the house. Crate training him so he wouldn’t cry at night didn’t really work out for us. For the longest time he slept in the bed with us. And then he grew and became a 75 lb dog. And then we started having kids. 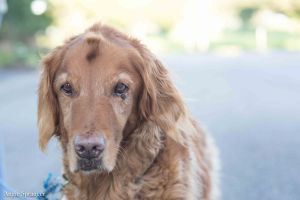 If you wanted to know what we were like as people, hanging out with Bear for 2/3 hours would have given you the gist of our family dynamic; he’s polite, caring, passionate about enjoying life, passive aggressive, generally happy, wants to get along with everyone, can be moody at times, slightly aloof, dreamy, always excited for good food and great company, always wanted to be in the same room or vicinity as those he cared about but didn’t necessarily desire to interact in every moment, overly sensitive, overly protective, a little bit lazy, always curious, always appreciative and grateful for those who cared deeply for him. He was courteous and always relieved himself on the perimeter of every lawn we’ve ever lived in or visited.

He only barked once every 6 months and I think he scared himself with how deep his bark was. And then there were those times he would sneak into Cecilia’s room during our story-time and fall asleep behind her glider; only to hear his deep protestations a couple of hours later, when he had to relieve himself.

He was amazing with the girls and they too were amazing with him. The four of them formed their own mutual admiration society. They would convene every night and sometimes every morning anywhere from the floor, to the dog bed, to their bed and back to the floor. Sometimes, including last night (his last night with us), he would sleep in Abby and Phoebe’s bedroom laying across one of their beds.

Our beloved dog left the world this morning.

He was the perfect dog for us. To say that he will be missed is an understatement. We are so lucky to have had Bear as our first pet. But I suspect it will be difficult for another dog to move in, because he set the dog bar so high. There’s a little hole in our family and our hearts this evening. Presently I am trying to remember that time will calm our pain and memories will fill our hearts. It won’t always hurt this bad.

“Thank You. You were an amazing dog. You will be missed! Again, thank you!”

out into the void tonight. 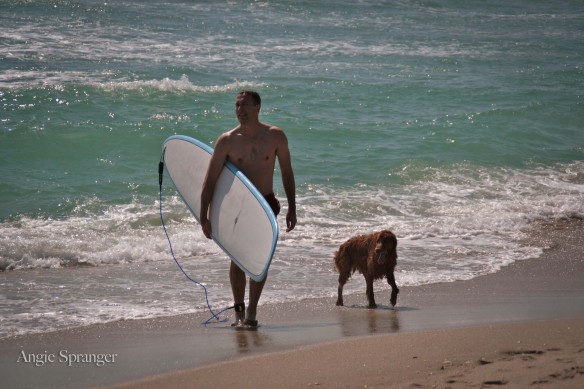 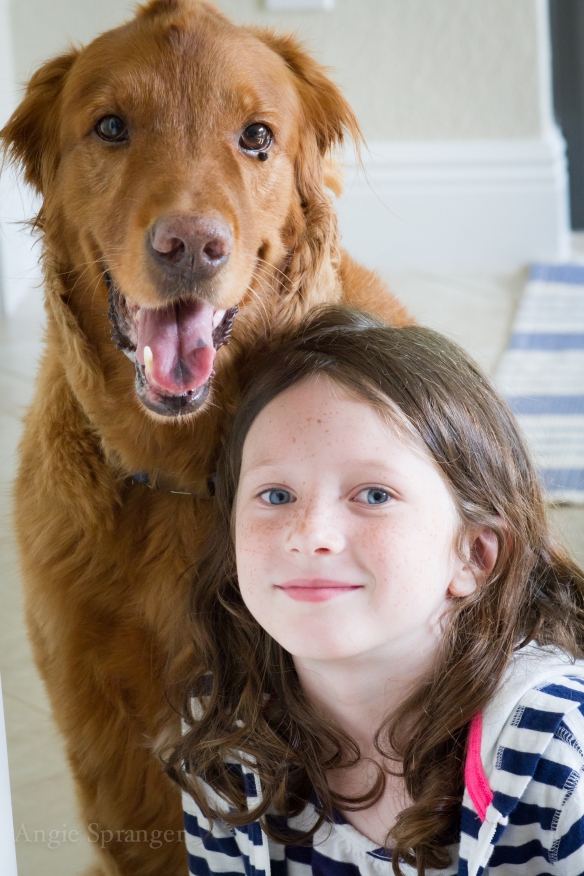 7 thoughts on “ONE HUNDRED FIFTY FIVE…Thank You Bear”