As soon as I published my last post…you know the one…where I was boasting about how great we were doing. How “happy” I was because we were naturally “falling-in-line without even trying” and how schooling had become “effortless”. Yeah that post. Well, I guess I spoke a little too soon. Cecilia and I came home from therapy and everything proceeded to go down hill from there.

Heaven forbid I have a great week, write about it…and actually CONTINUE to have a great week. It never fails though, as soon as I tell someone about the great day we are having, it all turns to pot. I wish it worked the other way around. There are those mornings when my friend Elena (who home schools her four kids) and I text each other to vent about our struggles with our kids during school. It would just be swell if , for once, we put down our  phone and our day would magically get better. It never works out that way though.

Ah well! A girl can dream. 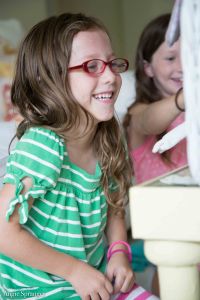 Funny stories from the week:

#1.  Thursday – I was in the bathroom, light on, door shut and locked about to enjoy a moment of silence when out of nowhere, Phoebe starts banging on the door and yelling, “Mommy, the thing broke off the thing! Come quick!” I ask her, “What “thing” Phoebe?” Of course she replies, “mom you know the thing that holds my stuff!!! It broke off!!! Hurry!!!” A thousand things went through my mind! For a split second I thought she might have been talking about the handle on the tub I keep all her homeschool stuff in. As I enter the kitchen, I start to head over to the tub I “think” she is talking about. NOPE. It’s not the tub.

She tells me to come over here (to the t.v. console). The knob to a drawer had fallen off the screw. “Oh well that’s no big deal Phoebe. It just fell off. I can put it back on.” As I went to pry the drawer open, I felt something slimey on the face of the drawer. I touched  and smelled it (of course)...it was glue. I asked her if she had put glue on the drawer. She scrunched up her little face and said, “Yeah, I tried to fix it but it didn’t work. Sorry mommy, I broke it.” “Oh Phoebe, you didn’t break it. It happens. The knob was loose from the screw. They come off sometimes.” I went to retrieve a wash cloth to wipe off the glue and told her not to put glue on any other furniture. “Okay mommy!” she said and ran off to continue her baby-doll drama. 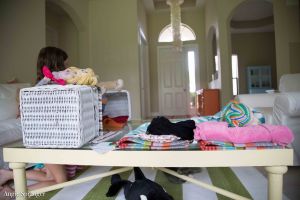 #2.  Cecilia and I returned from therapy this morning to find Abby and Phoebe scrubbing the kitchen cabinets, floor and refrigerator with hot soapy water which had been poured into a dirty old paint quart. The wood cabinets were soaked. I had a flashback to my food processor moment from last week. I took a deep breath and rubbed my eyes. Abby and Phoebe were so proud of all the *hard* work they had been doing. I thanked them, wiped the water off the cabinets and suggested they go ride bikes in the neighborhood.

#3.  This afternoon Abby and Phoebe officiated over a wedding ceremony among their stuffed animals. The vows were some of the most interesting I’ve ever heard. After the ceremony came the honeymoon. I over heard the sweet demure mermaid wife yelling at the whale husband because he was failing at his end of the household chores. But the big one, the one that landed whale in the confines of his bedroom for a year (yes you read that correctly…one year) was his inability to pick up his dirty underwear off the floor. Poor Whale husband. I felt sorry for him. He was all alone in his extremely small wicker basket bedroom with dishtowels covering not only his body, but his pride as well. His children, Margo (the boy bird – cause my girls have flexible gender boundaries) and Batty (the Bat)  and wife were playing with his dirty underwear, tossing it around and being silly.  I don’t know if Whale will ever rebound from the intense scrutiny he faced this afternoon. 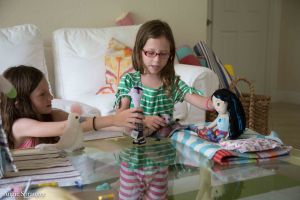 #4. Thursday night date night: Greg and I are engaged in a conversation over a nice dinner talking about our dreams when he describes himself as a ‘free-range chicken’. My cheeks still hurt from laughing so hard. Yes I took it out of context, but no matter the context, I don’t know anyone else who would refer to themselves as a ‘free-rand chicken’. Days later, I am still laughing.

#5.  And then of course there was this morning where I woke up to find Cecilia standing in front of me gagging and saying, “Uh oh” with red stuff on her face. I concentrated on the red stuff and touched it with my hand to make sure I wasn’t looking at blood. Lucky for the both of us it wasn’t blood. Greg rolled over and asked why she was saying, “Uh oh”.  I got out of bed and picked her up and went into the kitchen where I found the pizza box from last night on the floor with the red pepper flakes EVERYWHERE. I then looked at her and she said (in her mosts pitiful tear-filled voice) and signed, “water”. I bet she won’t do that again.